A progress report.  My current project, a novel about a Jewish-American woman born in 1918 and that follows her life for approximately 40 years, is actually taking shape.  I’m about 130 pages into it and even though it’s mostly being writing under the constraints of my “hummingbird” method, things are starting to fall into place.  I’m enjoying getting to know the protagonist, as well the other characters in her life, and look forward to each new, albeit brief, session. 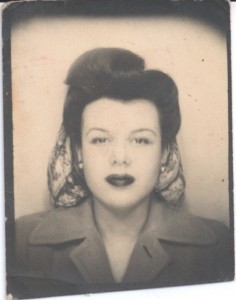 Because this novelis set in real places and at a real time in history, I needed to do a lot of basic research before

I ever wrote a word.  But once I’d completed what I absolutely needed in the way of research, I had a choice:  to either continue to research everything I possibly could or or to start writing and do

I love the research and could easily let it drag on for years and years and never actually start to write. Working as I do, when I come to a point in the story where research is essential, I either stop and do it on the spot or mark the passage and return to it later.research on the fly.  I chose the latter.

My day lay ahead with nothing on my agenda except to write.  I hadn’t had a day like this in weeks and I was energized to imagine how much I’d accomplish.  Of course there was that service appointment with the Comcast technician who would arrive before noon and determine why the closed captioning on our TV wasn’t working.  No problem there.  He wouldn’t need me for anything except to open the front door and let him see that I’m over 18.

When the tech didn’t arrive by 11:45, I stopped work and called Comcast.  “Precious,” the woman who took my call, quickly disabused me of my assumption that I had an appointment.  This, despite what “Ronald,” the Comcast technician with whom I had spent over an hour the day before in an on-line chat had told me about needing be sure that somebody over the age of 18 would be home between 8:00 AM and 12 noon when he finally determined that he couldn’t diagnose the problem, had told me.   What was scheduled, “Precious” assured me, was a “call” from a technician, between the hours of 8:00 AM and 12 noon, who would tell me how to diagnose and fix the problem myself.

“I haven’t gotten that, either,” I whined.  It was noon.
“We’re talking, aren’t we?” countered “Precious.”
“But I called you!”
“What difference does that make?”

I swallowed my anger and conceded her point.  We needed closed captioning.

After an hour of pressing button-after-button on the remote, turning the cable box off and on, and continuously reassuring “Precious” that nothing had changed, she announced that my only hope was to disconnect the cable box and drive it to the Comcast Store in Santa Rosa where I could swap it for a new one. 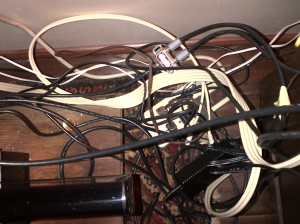 The prospect of any new piece of electronic gadgetry (even something as mundane as a cable box)  hit me like an infusion of dopamine and quickly squelched any residual notions of getting back to work on writing my piece about 19th century Russians.  I shut down the laptop and asked Luisa if she wanted to go for a ride.  I then proceed to prepare to sever the existing cable box from the jumble of wires that somehow deliver sound and pictures.  I disconnected the box from the wall-mounted TV, from the Comcast modem, from the Apple TV, from the Blue Ray player, from the Sony receiver and from the sound bar.  I photographed the back of my “old” cable box and labeled every one of the hydra-like tangle of wires. We were off to Comcast!   (to be continued)