It took me a while to realize that I’d developed a system for sustaining my writing over long periods of time.  There was nothing intentional about it.  It only became evident in hindsight.  Here’s how my writing process seems to work:

Fermenting.  It’s not just for yogurt!.

Over the past ten years, I’ve written five full-length plays, four short plays, one full-length historic reenactment, one full-length film treatment, two books of short fiction and one published memoir. Spelled out, it seems a respectable list, but on those days when writing is the last thing I’m able to manage, I grow critical for not getting to “it.” 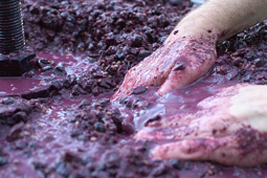 But if I’m willing to take a deep breath and step away from self blame, I begin to see that what looks to me like inactivity often serves a function; the function of “fermentation.”  Just as with making sauerkraut or yogurt or wine, fermentation is an essential component of my creative process.

My fermentation has two stages.  The first one often comes on early.  Once an idea for a story or play begins to take shape, I’ll outline what I think the plot could be, what form it should take (short story, play, etc.) who the characters are, the location . . . the essentials.  If research is required, I’ll start that, too.  If the shape of the writing project is clear and I’m satisfied, then I can work steadily at it for days or weeks at a time.  It’s one of my favorite aspects of the writing process.

But often, after that initial burst of enthusiasm and creativity, I’ll run into what feels like a brick wall.  Nothing makes sense . . . what had recently felt exciting now feels uninspired and flaccid.  Rather than toss the project, this is the time for me to launch the first period of fermentation.

When I realized that this reader was asking me less about the possibility of reincarnation or sex-reassignment surgery than about how I create and develop fictional characters for my short stories, I started an answer in my blog of 7 December 2012. This is a continuation of that answer.

We lived in Eagle Rock from 1986 to 2006 and whenever I needed to buy paint for a home- improvement project, I’d shop at the Home Depot on San Fernando Road. Every winter we battled erosion from the hill that rose up behind our house. We solved the problem by installing a cinder block retaining wall, but it made the view from the kitchen and the patio reminiscent of something you might see from a cell in a state prison.

I decided to paint the wall. I had recently returned from a trip to central Mexico and the amazing colors that bring so much beauty to villages in the state of Queretaro were fresh in my mind.

I selected the colors I wanted from a wall of samples: a fuchsia; a midnight blue; and a sea green and handed them to the clerk. She wondered what I was planning to paint. I told her. She said she liked the colors but was surprised I could “get away with it.” Where she lived, it would be impossible. She said that she took her dog to the Silver Lake Dog Park and there was a house on the way that was brilliantly painted and just looking at it made her smile. I thanked her and headed to the cashier to pay.

Something about that brief exchange touched me and it was enough to get me started. Over the next weeks, I thought about that clerk and the insight her job might provide into the lives of her customers. People looked to her to help them find expression through color.

In general, I knew the kind of personality and range of challenges I wanted to write about, but to do it, I needed a real life. So I named my character “Clarisse” and began to give her a biography; a life story. It was only when Clarisse came to life for me as a person that I knew the shape her story should take. Eighteen months later, Clarisse was born and eventually published in my first collection of short story fiction, Gone to Ground.

I often think about Clarisse and recently decided that it’s time to bring her back. I want to know how things are going for her.

That’s a question a reader asked after he finished my fictional short story “Clarisse” in my first short story collection, Gone to Ground.  At first, I didn’t see the significance.  As far as I knew, I’d never been a woman and I was sure I’d never worked in a paint department.  End of story.  But as I thought about what lay behind the question, I realized that what he really wanted to know was, what was the genesis of this short story and how was I able (if indeed, I was) to write convincingly in the voice of a woman who did work in a paint department.

So let’s talk about where my short story ideas come from.  In fact, most of my short stories grow out of some experience I’ve had or heard about.  I’m an inveterate eavesdropper and take notes of conversations that intrigue me.  One of my short plays, Oakland Triptych, is a good example.  Over a period of several months, I overheard and took notes of one-sided cell phone “conversations” while I waited for flights to L.A. out of the Oakland International Airport.  At night in my hotel, I transcribed these monologues (that’s really what they were since I could only hear one side of each conversation) as accurately as possible.  Then I let them ferment.  When I had three monologues that I thought held promise, I worked through them, one-by-one and tried to imagine what the other party might have said to elicit the speaker’s next lines of dialogue.  Even though I knew they wouldn’t be part of the final product, I needed to have as deep an understanding as possible of each character and his/her motives.  Once I was satisfied that the three conversations I’d created made sense and were as powerful as I could make them, I removed the second (unheard) dialogue and edited the remaining monologues so they would work as very short, stand-alone, one-character plays.  Each of the three needed to have sufficient dramatic structure to keep an audience engaged, even for a short time.  The result:  Oakland Triptych .

I’ll tell you where Clarisse came from  in my next post.