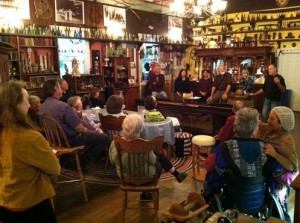 Saturday afternoon, I read from my new memoir Sometimes I See You at the Druids Hall at the Plantation Farm Camp.  It’s a wonderful setting and thanks to the generosity of the owners of Plantation, David and Suzanne Brown, it occasionally serves as a showcase for local writers.  Built originally as a meeting place for members of the Ancient Order of Druids, it first morphed into a dance hall, then a library and craft center for the Camp, a storage building, and now a wonderfully restored museum of local memorabilia from the 19th and 20th centuries.  When I was thinking about what to read on Saturday, I figured that most of the audience would be local and that many of them had lived in the area since the 1970’s.  With that in mind, I chose to read a section from the book that dealt with that time and this place.  It worked!  There was real enthusiasm for the book and lots of questions.  Amazingly, we sold out all the books I’d brought.  A friend and fine reader, J Anderson, read a story from my first short story book, Gone to Ground.  It required him to take on the persona of a middle aged woman from west Texas who sells paint in a Home Depot near L.A.  He did a great job and the audience appreciated him and the story!

I wanted to find a photo of the interior of Druids since we didn’t have a good one from Saturday’s event.  I checked the web and low-and-behold, came across this photo, posted by Jacob Bayless.  It was taken last year when we performed a readers’ theatre version of my short story, Redwood Radio from my second collection, Fetching Molly.  The cast was great and so was the response.

If the next reading (April 19th at the Occidental Center for the Arts) is even half this much fun, I’ll be a happy camper!

Friday night I fixed an early dinner for Luisa, Marley and me and then headed to the village of Occidental to attend the launch of Cigar City Stories: Tales of Old Ybor City by Emilio Gonzalez-Llanes at the Occidental Center for the Arts (OCA). 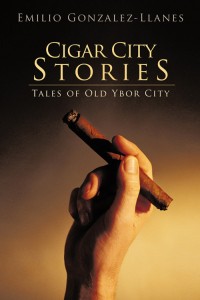 I didn’t have a clue what to expect.  I’d never heard of anything called Cigar City or Ybor City but I do enjoy hearing, and supporting, other local authors.  I’ve attended several book launches at OCA.  Our long-time friend, Gretchen Butler, launched her wonderful book, Wild Plum Cafe  at OCA and, more recently, a terrific book, The Body’s Perfect: A novel in Stories by Christopher Reibli, was released there.  Gretchen had a local folk/roots group play before her reading.  Christopher has his own band and they played before the reading.  Christopher also sings.

When, to a packed audience, the program started on Friday, Cuban music played on a CD and Emilio, a fit guy in his mid 70’s, came dancing out on stage.  He danced on stage for 2 or 3 minutes.  Are you getting the picture here?  I don’t have a band.  I don’t dance solo (at least in public) but I’m scheduled to be the next book launch (April 19th in case you can make it!).  With every shake of his maracas, my heart sank.

I’m reading from my memoir:  Sometimes I See You.  I don’t think it’s depressing, but it is about our family during the 24-years that my daughter, Shoshana, was alive.  Maracas won’t cut it.

Forget that.  I really enjoyed Emilio’s reading.  The stories vibrate with detail and emotion and expose a world I’d never known.  And, when I got home, I realized that I had more in common with Emilio than I’d first thought.  My maternal grandfather, who emigrated from Minsk to New York at the end of the 19th century, made cigars in the Bronx, much as immigrants from Cuba made cigars in Ybor City.

And, even better, Judith Moorman who is organizing my “launch” assured me that I wouldn’t need to dance!