One of the challenges of writing or speaking is to know when enough’s been said and it’s time to stop.  I wish there was a test to make clear when I’d finished.  If such exists, I haven’t found it.

Because I’ve recently completed a draft of a new book, endings are very much on my mind. The book has the working title, The Queen of Kansas.  It’s a fictional memoir set between the years 1936 and 1948,  I’d outlined the entire book in advance of sitting down to write so I had a reasonably clear idea how it would be structured and what would constitute the components of its beginning, its middle and its end.

I’m working with specific time parameters and am basing the book on lives of real persons, so I did know, at least in a temporal sense, approximately when the book would end.  I was less sure of the right emotional note on which to conclude the story.

My first attempt at an ending felt as if I’d found a good parking spot, parked, but when I turned off the engine, my car wouldn’t quit running.  Actually, I’m not sure cars still do that but I like the metaphor.  When I’m on a roll and words k 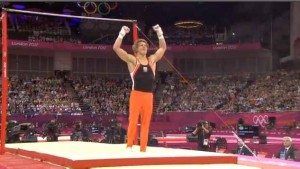 eep coming, it’s not obvious to me I’ve said too much.  In this case, it took reading the draft of my book aloud to Luisa for me to hear that my engine was “running on” and the real ending should have been several pages back.

The “ending” metaphor I like best is sticking an ending the way gymnasts “stick” a dismount.  No hops or lunges.  Just two feet hitting the ground at exactly the same time and staying put.