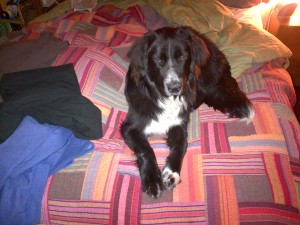 I like to say that for the past two months, my writing has been constrained by our new dog, Mischa.  But really, it’s not her fault. She’s just being what she is: an enormous puppy that needs lots (and lots) of attention. Now one-year old, Mischa is a Newfoundland-Bernese Mountain-Dog mix. Mainly she’s Newfoundland. We’ve had her since early March when her original family found that she, along with their young child, were too much.

Mischa has exemplary qualities. For instance, she hasn’t yet consumed any of our other three, small dogs (one Corgi and two Dachshunds) nor has she dug up the two remaining  Rosemary and Lavender plants I added to our back garden last June. She’s even made more room in the house by biting a hole in the Swiss exercise ball I kept in the guest room. I wasn’t using it all that much and it did take up space.  And, she has an eye for interior design as evidenced by when she dragged a small Persian rug out of the living room and chewed off one corner. It must have clashed with the sofa.

Since we discovered a nearby dog park, I’ve taken her every day. Misha bursts out of the double-gated holding pen with the energy of a rodeo bull. Despite her size, she’s still a puppy and a very friendly, gentle one. She easily befriends most other dogs and their owners. Of course that makes me happy. There are rubber tubs filled with water and when she’s ready to take a break from playing chase with an elegant, white poodle or a pair of young, black labs, she jumps in to cool down. By the time we get back to the house, Mischa is ready to kick back and the rest of her day is mellow.

So how much of my current dry spell can I lay at Mischa’s paws?  Doesn’t really matter.  Next week I’m getting back on track!

OK, so we’ve licked the honey off the page to guarantee a sweet association with reading.  But now, at 11 or 12 or 13, you’re way past needing artificial sweeteners and by now have discovered that the real sweetness is in the act of reading itself.

And so many other wonderful books that drew me in and transported me to other worlds.  Mostly I read to myself, by myself.  But there were times, especially with my older, girl cousin, when we would read “together.”  We’d lie on the floor and she’d read her book and I’d read mine.  I don’t remember that we talked much about what we were reading, but there was something quite magical in being in the same place at the same time and just reading. 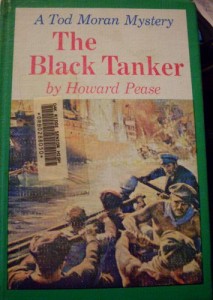 Do you have memories of reading with a friend or relative and when that was enough?